Okay…so I didn’t literally almost puke at the sight of this, but I came close. 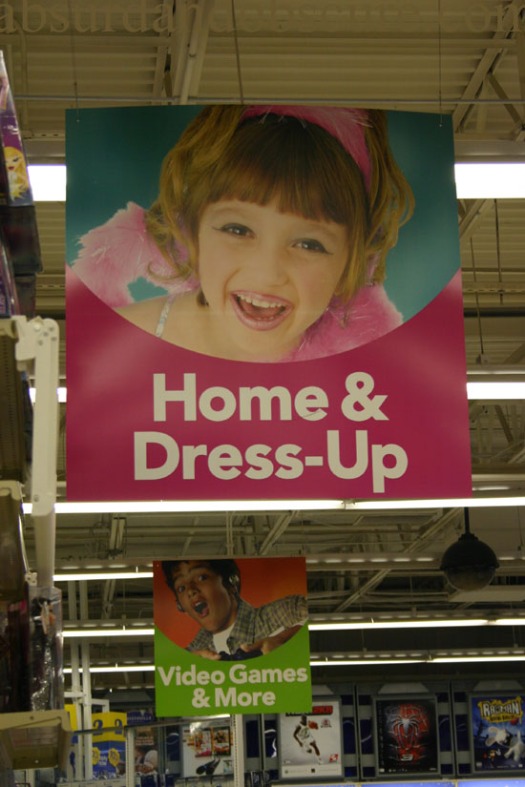 What the hell is Toys R Us thinking putting shit like this up? Okay okay, let me back up in case you don’t quite catch on to just how frightening this display piece/aisle marker is. On top of being an absolutely horrible photo (I blame the photographer, not the kid), it’s perpetuating the idea that girls should wear make up, and lots of it. You can say whatever you want about the benefits of “playing pretend” and you could even go so far as to point to the importance of “looking your best” for the sake of hygiene and all-around mental health…but something like this is ridiculous. The fact that it was even conceptualized, let alone passed X number of tiers of command within the company, and actually exists in a store is even more ridiculous.

Whenever I see young girls dressed up like this one from time to time, I always envision a parent or parents not only allowing their daughter to look like this, but congratulating and cheering on their daughter on for having made “the right choice” to “be pretty.” I then automatically assume that such an upbringing will lead to scores of problems with self-consciousness and overall sense of self when the girl starts to grow up. Maybe that’s unfair, but it’s still a horribly irksome and not totally unfounded assumption.

I fear the day when I have a daughter who is unable to think of herself in a positive light without altering how she looks as significantly as the girl in this photo has. It’s one thing to goof off and pretend, but it’s something completely different to actually believe that you are nothing without that which can be added (or taken away) to your physical body. To believe that this is true is a horribly unhealthy way to create one’s self. I’m sure I’m not the only one who’s heard of girls who haven’t even made it to second grade who hate themselves for not being “pretty.” I know kids can be cruel, but buying into such nonsense (especially at such a young age) can easily introduce and/or catalyze a dynamic that’s even more dangerous: absolute self-hatred.

The whole thing seems highly questionable and alarmingly unfair…but what do I know? I’m just some guy that has neither children nor a degree in child psychology…but does your daughter or niece or little cousin know any better? Do they have a degree in child psychology? Of course not. My point is that you need to pay attention to weird sex/gender-assigned anomalies like this and see to it that your daughter doesn’t end up going insane worrying over problems that don’t even exist before she can even drive.

(I mean really…even the kid behind her disapproves. Look at his face. Does he not look shocked and/or appalled?)

On the bright side they did have these cute Curious George toys:

…but even these are sketchy. The one on the left especially because of the way the soft body and heavy head are constructed lends itself as a whole to being rather similar to a sock full of quarters.